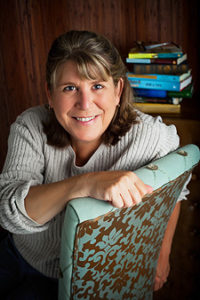 After attending four different high schools in Milwaukee, Lesley enrolled in Marquette University where she majored in her boyfriend. She followed him to New York City where they lived above a 24 hour soul record store, hence her ability to hum the chorus to every James Brown song. After that grand adventure, she returned home to attend University of Wisconsin-Milwaukee to major in radio and TV for a reason she no longer recalls other than it seemed like a good idea at the time. Soon after, she feel into a job at WZMF radio, one of the countries first underground (hippie) stations where she had the chance to interview the likes of Frank Zappa, Jimi Hendrix, and John Lennon.

In 1976, she moved to Los Angeles where she began a twelve-year stint, writing, producing, and voicing thousands of radio commercials for one of the largest radio chains in Southern California---Licorice Pizza. She also starred in hundreds of other radio and television commercials and a few sit-coms like Bad New Bears and LaVerne and Shirley.

After she met her husband, who was part owner of a sushi bar, they had two kids, Casey and Riley, both of whom are exceptionally brilliant, kind, and extremely good-looking. They came back home to Wisconsin when the children were young and opened one of the first sushi bars in Milwaukee. Lesley also continued acting in commercials in Chicago.

Although she's been writing her entire life, it wasn't until her children flew the coop that she found the time to take a run at her first novel--Whistling in the Dark--which, despite its humble beginnings became a New York Times bestseller and winner of numerous awards. She's since written eight more novels. Her newest is The Mutual Admiration Society, which has been on the Amazon bestseller list for seven months. In 2020, please look forward to the release of her newest novel Every Now and Then.

When she's not writing, Lesley loves spending time with the loves of her life, her family. She's nuts about pickle ball, hiking and biking, reading, movies, gardening, and hanging out with her dog, The Amazing Gracie. She lives in a hundred-year-old farmhouse in a small town in Wisconsin. Her award-winning, New York Times bestselling new novel Every Now and Then is both a nostalgic coming-of-age story and a mystery that tackles issues like mental illness, racism, friendship, guilt, and the power of hope.