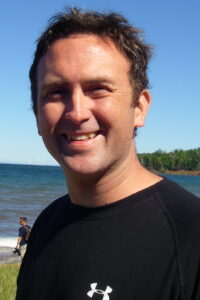 He has more than thirty novels and countless games published to date. His recent work includes Minecraft Dungeons: The Rise of the Arch-Illager, Halo: Bad Blood, the new Dungeons & Dragons: Endless Quest books, the Star Wars: Rogue One junior novel, Dungeonology, and The Marvel Encyclopedia, plus work on Assassin’s Creed: Origins, Ghost Recon Wildlands, and the Shotguns & Sorcery roleplaying game based on his novels.

He lives in Beloit, Wisconsin, with his wife Ann and their children: Marty, Pat, Nick, Ken, and Helen. Those last four are quadruplets, but that’s a whole ’nother story. For more about him and his work, visit Forbeck.com.