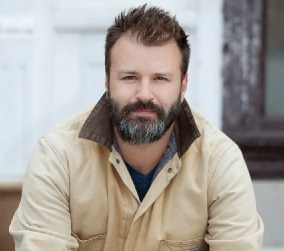 Nickolas Butler was born in Allentown, Pennsylvania, raised in Eau Claire, Wisconsin and educated at the University of Wisconsin-Madison and the University of Iowa Writer's Workshop. He is the author of the internationally-best selling novel Shotgun Lovesongs, a collection of short stories entitled, Beneath the Bonfire, and The Hearts of Men which has already been longlisted for two of France's top literary awards. He is the winner of France's prestigious PAGE Prix America, the 2014 Great Lakes Great Reads Award, the 2014 Midwest Independent Booksellers Award, the 2015 Wisconsin Library Association Literary Award, the 2015 UW-Whitewater Chancellor's Regional Literary Award, and has been long-listed for the 2014 Flaherty Dunnan Award for First Novel and short-listed for France's FNAC Prix. Along the way, he has worked as: a Burger King maintenance man, a tutor, a telemarketer, a hot-dog vendor, an innkeeper (twice), an office manager, a coffee roaster, a liquor store clerk, and an author escort. He lives on sixteen acres of land in rural Wisconsin adjacent to a buffalo farm. He is married and has two children.