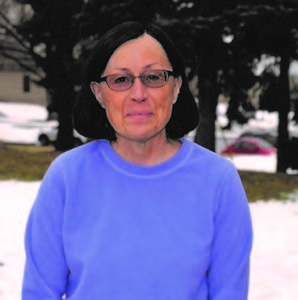 This book, "Sky Woman Lives in Me", took me fifteen years to research and write. I agree with Dawn Walschinski, Editor of the Oneida Newspaper, Kalihwisaks, that my process of writing this book probably started when I saw a photo of an elderly Oneida woman in the Milwaukee Museum when I was seven years old. Why I couldn’t stop seeing the image of this elderly lady in my mind for years haunts me. Ironically, four decades later in the year 2000 I see the same photo, hanging on a wall in my sister’s home.

I am one-half Oneida Indian and also: Dutch, Scotch, Welsh, and one-quarter Norwegian. Because I was raised in the Euro-white world, I didn’t know anything about Oneida Indians, let alone me being one. The only Indians I knew were the ones shown of television westerns! I went to public schools in Milwaukee, Greenfield, Lac du Flambeau and Minocqua, Wisconsin. Now, at 64, I am just learning about my Oneida heritage. I feel like a baby just taking her first footsteps. I have so much to learn about my Oneida culture I feel like I am in kindergarten.

As for personal things about me, I love to run. I have run 20 marathons. I also love to bake. I sing in the shower because I am shy. I will spend the next years of my life learning about my lost Oneida heritage.