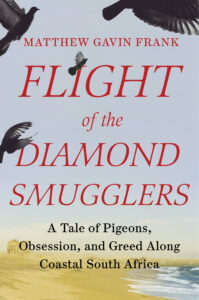 Flight of the Diamond Smugglers: A Reading and Discussion

Join author Matthew Gavin Frank to learn more about his remarkable portrait of exploitation and greed in his latest book, Flight of the Diamond Smugglers (released by W.W. Norton: Liveright, 2021). Frank’s compelling investigation into the bird’s unexpected role in the diamond trade has been called lyrical, raw, and heartbreaking. For nearly eighty years, a huge portion of coastal South Africa was closed off to the public. With many of its pits now deemed “overmined” and abandoned, American essayist Matthew Gavin Frank sets out across the infamous Diamond Coast to investigate an illicit trade that supplies a global market. Immediately, he became intrigued by the ingenious methods used in facilitating smuggling— particularly, the illegal act of sneaking carrier pigeons onto mine property, affixing diamonds to their feet, and sending them into the air. Weaving interviews with local diamond miners who raise pigeons in secret with harrowing anecdotes from former heads of security, environmental managers, and vigilante pigeon hunters, Frank reveals how these feathered bandits became outlaws in every mining town. In Flight of the Diamond Smugglers, Matthew Gavin Frank reminds us that the world is a place of wonder if only we look.

Register for the live virtual event through Zoom HERE! The event will be livestreamed to the Fox Cities Book Festival’s Facebook page and a recording will be available to watch after.