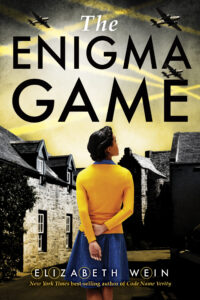 Young adult author Elizabeth Wein has lived in England, Jamaica, the United States, and Scotland, and has flown in small aircraft on four of the five continents she’s visited. From her bestselling World War II thriller Code Name Verity to her non-fiction A Thousand Sisters, about the Soviet women who flew combat missions during World War II, Elizabeth’s books reflect her global interests; she draws on settings as far away as Russia and Ethiopia for inspiration. Join her for a flight of the imagination as she talks about her most recent novel, The Enigma Game, relates her experiences both on the page and in the air, and shares her tips for creativity. She will be joined in conversation with Chris Henry, EAA Aviation Museum Programs Representative, and author of The Final Mission: Personal Stories of the Lives Touched by EAA’s B-17.

Register for the live virtual event through Zoom HERE! The event will be livestreamed to the Fox Cities Book Festival’s Facebook page and a recording will be available to watch after.