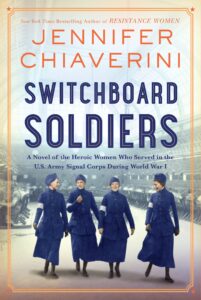 Switchboard Soldiers: A Novel of WWI by Jennifer Chiaverini

New York Times bestselling author Jennifer Chiaverini presents Switchboard Soldiers, a bold, captivating novel featuring previously unsung heroines of World War I—the women of the U.S. Army Signal Corps. In June 1917, General John Pershing arrived in France to establish American forces in Europe, but communications were perilously unreliable. Pershing needed telephone operators who could swiftly and accurately connect multiple calls, speak fluent French and English, remain steady under fire, and provide the absolute secrecy required for conveying classified military information. Nearly all American telephone operators were women, but women were not permitted to enlist in the army. Nevertheless, the Signal Corps began recruiting them. Deployed to supply depots, headquarters, and exchanges near the front lines, the operators endured hardships and risked death or injury from gunfire, bombardments, and a deadly new influenza. Not all of them would survive. The valiant women of the U.S. Army Signal Corps served their country with honor and played an essential role in achieving the Allied victory. Their sacrifices cleared the way for generations of women who followed, not only in the military, but in all aspects of American life.