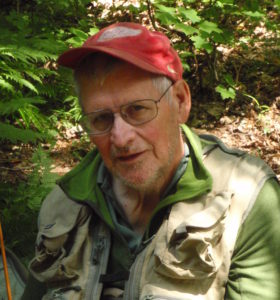 Joseph Heywood grew up as a USAF brat and graduated high school in Rudyard, Michigan in the year of 1961. He earned a degree from Michigan State University (1965-journalism), fought fires out west during college summers, and played club lacrosse at MSU where he was tri-captain as a senior. Heywood served in the USAF as KC-135 instructor navigator from 1965-1970.

Heywood is a Vietnam vet with an Air Medal and six oakleaf clusters. He is one of six USAF crewmen to ever survive parachuting from a KC-I35. Heywood attended grad school at Western Michigan University in the early 1970s, and he later taught in WMU's graduate writing program. He worked for The Upjohn Company from 1970-2000, retiring as vice president for worldwide public relations. His work has been published since 1985; he was 42. He and his wife Lonnie spend spring, summer, and fall in the U.P.

Lonnie is a retired art teacher. She and Joseph are both painters, brookie-chasers, and backroad wayfarers. Heywood is the author of eighteen novels, two short story collections, and a memoir. His work is published in 18 languages. His latest novel is Bad Optics. His next publication will be Upper Peculiar, a collection of 30 original short stories. This will be the author's 19th consecutive year on patrol with Michigan Conservation officers. Like the TV ad, he claims to know a thing or two because he's seen a thing or two.