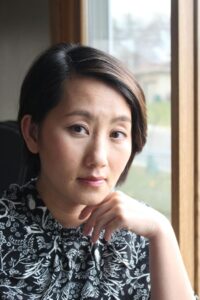 Kao Kalia Yang was born in a Hmong refugee camp in Thailand and moved when she was six with her family to St. Paul, Minnesota, home to the largest concentration of Hmong in the country. They began their life in the U.S. living on welfare in public housing until her parents took on multiple jobs to feed their family. To fill her time, especially during the long winters and because she couldn't afford to attend movies or concerts, Yang would read. While she loved books like the Little House on the Prairie series by Laura Ingalls Wilder, Yang recalls asking the librarian for books about people like her. "She gave me a book about the Chinese, the Japanese, the Vietnamese, but she couldn't give me a book about Hmong kids." That was one of her first callings to write, which was easier for her than speaking English.

Since the publication of her first memoir, Yang has been an avid public speaker on such topics as literacy and education; race, class, and gender; and the refugee and immigrant experiences. She has made a deep impact on the lives of, among others, Hmong readers and American Vietnam war veterans who have come to her readings.