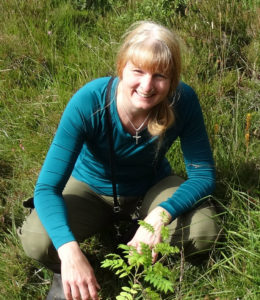 Laura Vosika is the author of the acclaimed and beloved Blue Bells Chronicles - a tale of time travel, mysteries and miracles, romance and redemption that ranges from the modern world of American classical music to the medieval battles of Robert the Bruce and James Douglas.

Apart from time travel, Laura is no stranger to the world of the Blue Bells Chronicles. Having grown up in the military, she spent her early years in Europe, visiting castles and ruins, later lived in Ireland, and frequently visits Scotland.

She earned a bachelor’s degree in music at Lawrence University, on trombone – like Shawn in The Chronicles- and spent years as a freelance musician on trombone, harp, and flute.

Other publishing credits include an essay in Glamour Magazine, Food and Feast in the World of the Blue Bells Chronicles: a gastronomic historic poetic musical romp in thyme, and Go Home and Practice, a music record book. Future projects include non-fiction books on raising a large family and The Theology of Music.

She currently lives in Minnesota with several of her nine children, three cats, and an Irish Wolfhound much like the Laird’s great hunting hounds, where she hosts the radio program Books and Brews with Laura Vosika.