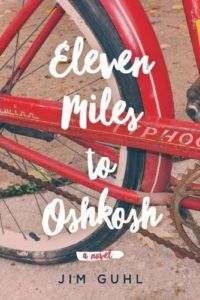 A Reading and Conversation with Jim Guhl

Author Jim Guhl’s new novel, Eleven Miles to Oshkosh, takes readers back to a 1970s Wisconsin where he tells the story of a teenage boy coming to age as he deals with the unsolved murder of his father.

As the Vietnam War grinds on and the Nixon presidency collapses, Del “Minnow” Finwick’s small world in Wisconsin has blown apart. His father, a deputy sheriff, has been murdered by the unknown “Highway 41 Killer.” His mom has unraveled. And a goon named Larry Buskin has been pummeling Minnow behind Neenah High. Minnow finds support in the company of his roguish grandfather, his loyal pal Mark, and beautiful Opal Parsons, who has her own worries as the first African American student in their school. When the sheriff seems in no hurry to solve the murder, Minnow must seek justice by partnering with unlikely allies and discovering his own courage.