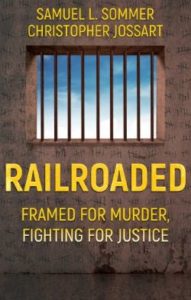 Living Inside a Hate Crime

A man spends more than twenty years in prison for murder without a grand jury indictment for his arrest. Now at the age of eighty-three, he represents the longest-running fight for exoneration on record in America.

Garbage trucks worth gold and winks that made the powerful look the other way portrayed an unstoppable era of corruption. It was spring of 1968 in New York City and a loving family man who built American Dreams for immigrants from Ellis Island saw his life on Long Island turned into a human heist. Kidnapped by police with help of an informant, Sam Sommer turned out to be the first victim of decades of injustice in influential America.

His lifetime fight for justice includes ongoing bouts with tears and rashes of terror against a family of grace. Author and speaker Christopher Jossart takes you inside a journey in writing a national top ten true crime head turner in Railroaded: Framed for Murder, Fighting for Justice (2019, WildBlue Press).