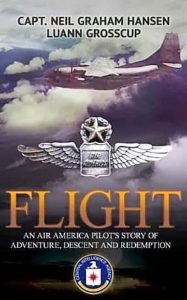 Air America pilots risked their lives over the skies of southeast Asia during the days of the Vietnam War and the secret war in Laos. Air America did not operate within the context of the

U.S. military, instead performing their duties as “shadow warriors,” owned and operated under the Central Intelligence Agency.

Beyond detailing covert operations with Air America (and including the day he had the dubious honor of being on three downed aircrafts in a single twelve-hour span), Air America Capt. Neil Hansen addresses his post-Air America time when he was flying for a fly-by-night commercial carrier in Cambodia in 1975. He escaped from there literally hours before the entire country fell to the Khmer Rouge at the time of the Cambodian holocaust. Neil escaped, in essence, by stealing a plane and flying in the blind, sans flight plan, from Cambodia to Bangkok, only a matter of moments before the murderous Khmer Rouge marched into Phnom Penh.