Festival Friday: The Art of Storytelling

Everyone has a story to tell – whether it be of another’s life experiences, of their own history, or of a creation from the fiction they carry within themselves. The Fox Cities Book Festival provides a platform to the storytellers of today, and showcases their talent to create a story readers can not only relate to, but also experience themselves within the narratives. 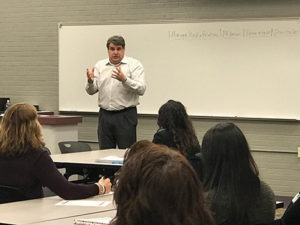 Christopher Jossart is a man of with many stories to tell. He is an editor, an award-winning non-fiction author, speaker, and trainer. His most recent work, Railroaded: Framed for Murder, is a story of retribution and justice. Through his narrative, Jossart gives voice to a man whose own was unjustly, and unwillingly silenced.

And while through his writing he speaks for those who may not be heard otherwise, Jossart provides a platform for others to tell their own story through his training and speaking.

Jossart delivers messages to and teaches people from all areas and sectors on how to develop their own story, or personal brand. 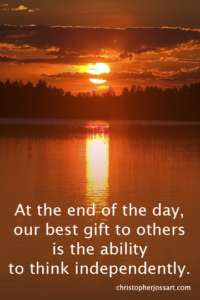 From his website, “Christopher Jossart delivers game-changing messages on both paper and from the podium, and he’s been doing so for 27 years.

“A 16-time award-winning writer and editor recognized nationally by the National Council for Marketing & Public Relations (NCMPR) and the non-profit sector, Chris’ work has appeared in international publications while overseeing thousands of news releases to print. Chris has earned distinguished status as a top 10 national nonfiction author, and his works have been used by a top U.S. law enforcement training program and have drawn media attention around the globe.”

Jossart will present Living Inside a Hate Crime, on Monday, October 7, at 11:30 AM to 12:30 PM, where he will discuss Railroaded: Framed for Murder, Fighting for Justice.

Every person’s story is unique. Wisconsin’s own Chris Multerer’s experience takes the memoir to another level, or into another weight-class. Multerer’s heavy-weight story brings the reader into the ring with him, and shares incredible moments of his life and career, from taking on Hulk Hogan to grappling with a 600 lb. bear

In his own words, “I’m 60 years old now, and invariably some aches and pains will remind me of the days when it was my job to make The Crusher, Mad Dog Vachon, and Hulk Hogan look like the pro wrestling superstars they worked so hard to become…

“I had the time of my life wrestling in nearly 700 matches across the country. Not many people can look back on a career and honestly say they loved what they did for a living. I feel like the luckiest guy in the world.  If I could, I’d go back and do it all over again!”

Multerer will be at the James J. Siebers Memorial Library in Kimberly, on Monday, October 7 from 1:30 PM to 2:30 PM. Multerer presents on his memoir,  Job Man: My Life in Professional Wrestling, telling his remarkable, decade-long career in the wild world of professional wrestling. 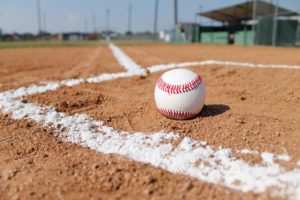 Some of the most fascinating stories hide in plain sight. Joe Niese captures the stories of the greatest of American pastimes – baseball, football, and the pioneers who helped create the franchises fans hold dear to this day and who often fly under the radar. 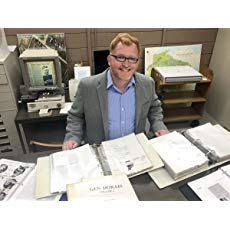 In his presentation, The Story of Football Innovator Gus Dorais, on Tuesday, October 8 at 12:00 PM to 1:00 PM,  Niese will talk about his book, Gus Dorais: Gridiron Innovator, All-American and Hall of Fame Coach. In it, Niese tells the story of Charles “Gus” Dorais who was Wisconsin’s first star high school quarterback. After leading Chippewa Falls High School to the Wisconsin Interscholastic Championship in 1909, he went onto a storied collegiate career at the University of Notre Dame, where he revolutionized the game with his good friend, roommate and receiver, Knute Rockne. 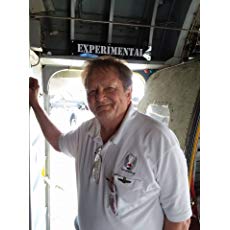 For a long time, Neil Hanson’s story could not be told. This past spring, in March, 2019, Hanson’s story became one that now sits on many a bookshelf. From inside the flap: “This historical aviation narrative incorporates the pathos of a war zone, humor, and candid insight. Neil pulls the reader directly into the cockpit, onto dirt mountaintop landing strips, into the raunchy brothels of Laos, alongside his first toddling steps into Buddhism, aboard the plane he flew out of Cambodia hours before it fell to the Khmer Rouge, down the road of self-destruction and beside him as he regains a foothold on the path to integrity.”

In his own words: “Flying for the CIA’s secret airline was a dream come true.  Air America’s operations were unknown.  Its schedules were irregular.  Its pilots were shadow people.  It was the world of spooks, covert air ops and adventure.  I had already been a pilot for more than half of my life when I left my home in Detroit for the wild escapades that awaited me in Southeast Asia.  Air America had been the pinnacle of my life and, had the trajectory remained steady, my world and my career should have gone onward and upward from that point.” 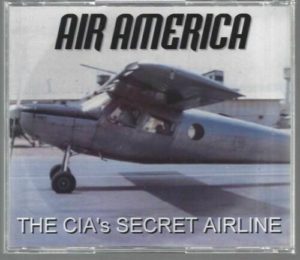 Hanson shares his story with the intention of shedding some light on a time in US history that hasn’t had much spotlight. Not only does he open the eyes of Americans to his own personal story, he takes the reader on a historical journey through the not so clear (at least until now) skies of Air America.

Neil Hansen is a native of Grand Rapids, Michigan. He spent more than a decade in Southeast Asia during the Vietnam war era as a captain for Air America, accumulating more than 29,000 hours flight time, 9,000 hours in a combat zone. His writing has appeared in various publications and he has been on the interview and speaker circuit for years. He makes his home in Oshkosh, Wisconsin, home of the world-renowned annual Experimental Aircraft Association AirVenture Fly-In. 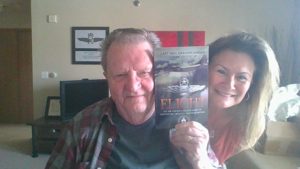 Throughout Hanson’s account, most names were changed – to protect the innocent and guilty alike. On Saturday, October 12 at 9:00 AM to 10:00 AM, at the Elisha D. Smith Public Library in Menasha, Hanson will present An Air America Pilot’s Story of Adventure & Descent and Redemption which he co-authored with Luann Plamann Grosscup.  Grosscup worked in the aviation industry for a decade as a flight attendant and a ground agent. Her second career took her into the publishing arena where her interest in historical aviation saw her articles published in the Chicago Tribune and various military publications. A native of Appleton, Wisconsin, she has lived most of her life in the in the Chicago area. 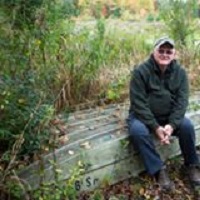 From farm-boy, to UW-Madison Proferssor Emeritus, to award-winning author, Jerry Apps, has been stories of all-things-Wisconsin – both non-fiction and fiction – throughout his life. He has authored more than 35 books, many of them telling the stories of rural history and country living. His nonfiction books also include the stories of other aspects of Wisconsin living – current and past. Apps has examined topics such as one-room Schools, cheese, breweries of Wisconsin, and the history of the Ringling Brothers circus.  He has written and published novels, including a YA novel, and he has an audio book, The Back Porch and Other Stories. Apps is a former publications editor for UW-Extension, an acquisitions editor for the McGraw-Hill Book Company, and editor of a national professional journal. 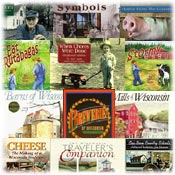 Saturday, October 12 from 1:00 PM to 2:00 PM, at the Elisha D. Smith Public Library in Menasha, Apps will discuss his book, The Civilian Conservation Corps in Wisconsin. In it, Apps tells the story of the CCC that, between 1933 and 1942 was a popular New Deal relief program and at work across America. During the Great Depression, young men lived in rustic CCC camps planting trees, cutting trails, and reversing the effects of soil erosion. Apps will describe the CCC’s work in the Badger State, from the Northwoods to the Driftless Area. 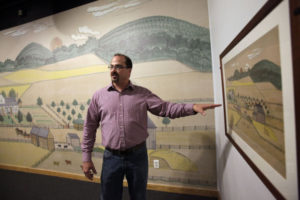 Joe Kapler has been on the staff of the Wisconsin Historical Society since. He has curated ten major exhibitions and numerous smaller displays. Kapler is a long-range planning, developing collections, and producing content for many outlets. He recently published Wisconsin in Watercolor: the Life and Legend of Folk Artist Paul Seifert.

Kapler tells Seifert’s story through his eyes as a historian and curator. He examines the life of this enigmatic artist and provides context for his extraordinary art. The book features high-quality reproductions of twenty-two Seifert watercolors (more than half of which have never been published) and many close-ups of his characteristic details, from horses and hay wagons to dogs and dinner bells. Part art history treatment, part coffee table book, part research memoir, and part love letter to the Driftless Area, Wisconsin in Watercolor shines a long-awaited light on Seifert and the land he so carefully rendered over a hundred years ago. 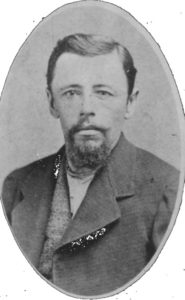 In his talk, Wisconsin in Watercolor: the Life and Legend of Folk Artist Paul Seifert, at Elisha D. Smith Public Library in Menasha, on Friday, October 11th at 1:00pm to 2:00pm, Kapler continues to tell the Paul Seifert’s story and and how his life experiences in his native Germany and new home in Wisconsin’s Driftless Area influenced his art. He will also delve into the several of the farm scenes by providing additional information about the people who lived on these farms, the bygone farming methods depicted, and what became of the farms and families. Lastly, Kapler describes the 15-year quest of tracking down Seifert’s story and paintings in hard to reach places, which required playing the role of skeptical detective or optimistic advocate all the while attempting to balance those perspectives as an historian.